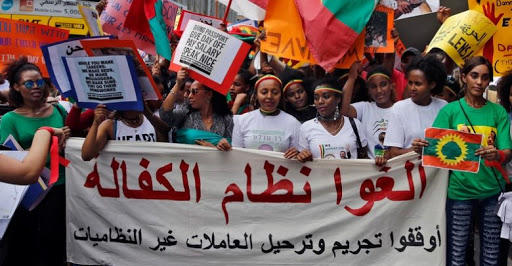 Lebanon launched a new contract for the recruitment of domestic workers in the country, in an important step towards the abolition of the sponsorship system that regulates migration to Lebanon and other countries in the region.

The contract, which is based on a reform work plan and a draft contract drawn up by the ILO and key stakeholders, addresses many of the essential elements of the sponsorship system that can lead to forced labor. It clearly states that domestic workers have the right to leave the house on the weekend as well as an annual leave. Workers are also not required to pay recruitment fees or other related costs.

Employers are also prohibited from withholding wage payments and withholding passports and other personal documents, from their workers.

“The contract is an essential first step towards abolishing the sponsorship system in Lebanon, which has been criticized by international human and labor rights bodies, trade unions, civil society and the media”, said Frank Hagman, Deputy Regional Director for Arab States at the International Labor Organization. This will lead to better protection of migrant workers.

The sponsorship system consists of a set of laws, policies, practices, and customs that regulate the management and residence of the migrant workforce. It creates an unbalanced relationship between employers and migrant workers, which impedes their freedom of movement and their right to terminate employment or change employers, as well as other negative practices, all of which expose them to the dangers of forced labor.

One of the main provisions of the new contract is the terms of termination of the employment contract that allow the employer or worker to terminate the contract unilaterally by providing a notice one month in advance, and the right to terminate it immediately in case of violating these provisions. These violations on the part of the employer include withholding the payment of wages and seizing the passport, in addition to other violations such as physical, psychological and sexual assault and economic harm.

Other important provisions that employers of domestic workers must comply with include: Paying a wage that is consistent with the national minimum wage, taking into account potential deductions for housing and food determined by the Ministry of Labor; providing insurance that covers health care and work accidents; Paying sick leave; right of the domestic worker to step away from danger until the dangerous situation is fully addressed; providing a separate private room to accommodate the domestic worker, appropriately furnished, well ventilated and should have a lock, which key is given to the worker only. The conditions also underscored the need for the duration of work not to exceed 48 hours per week, with the possibility of overtime work for a wage that is 50 % higher than the normal wage in such exceptional cases and finally ensuring that the working day does not exceed 12 hours.

Tunisia: Inauguration of a new cemetery for drowned migrants in Zarzis

CNLD: Algeria has more than 210 prisoners of conscience

Palestine: new petition calling for the resignation of Mahmoud Abbas